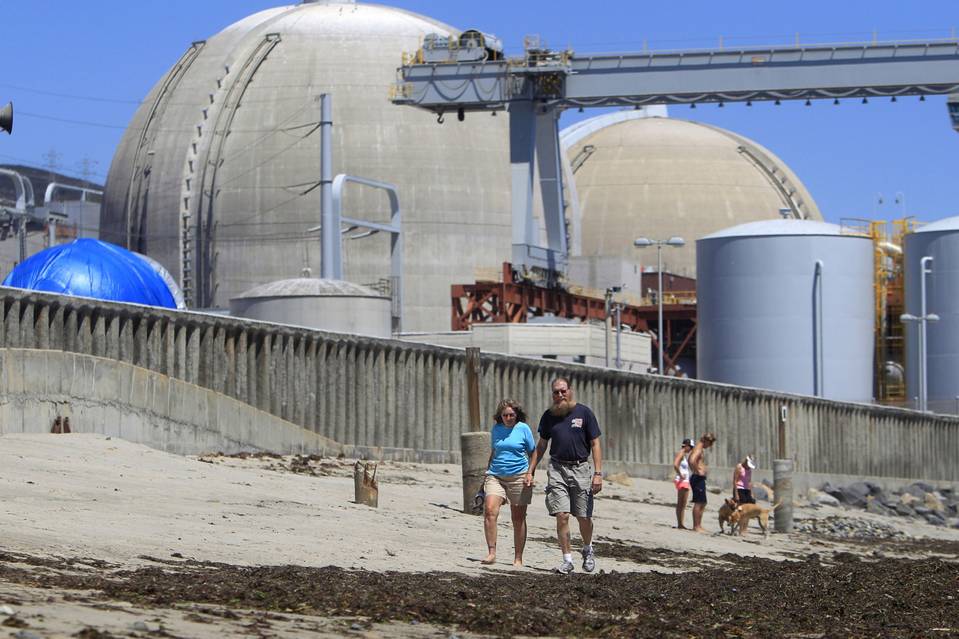 In this 2011 file photo, beachgoers walk near the San Onofre nuclear power plant in San Clemente, Calif. Units 2 and 3 of the plant were closed in 2013. PHOTO: LENNY IGNELZI/ASSOCIATED PRESS

Some of the nation’s most influential environmental groups are softening their longstanding opposition to nuclear power, marking a significant shift in the antinuclear movement as environmentalists’ priority shifts to climate change.

The change is lowering one of the biggest political hurdles facing the nuclear power industry in the U.S. and comes at a critical time, as several financially struggling reactors are set to shut down.

“Because the historical context is that these groups were opposed to nuclear, their absence on the opposition front is noticed,” said Joe Dominguez, executive vice president for governmental and regulatory affairs for Exelon Corp., the biggest owner of nuclear plants in the U.S. “I think it’s pretty significant.”

Nuclear power, which emits no greenhouse gases, provides roughly 20% of U.S. electricityand 60% of carbon-free electricity, according to federal data. Pressed by cheap natural gas and state policies that favor renewables over nuclear power, roughly a dozen reactors are either poised to shut down in the coming years or have already.

The Sierra Club, the country’s oldest and largest environmental group, is debating whether to halt its longtime position in support of shuttering all existing nuclear-power plants earlier than required by their federal operating licenses. The environmental group’s leaders see existing reactors as a bridge to renewable electricity and an alternative source of energy as the group campaigns to shut down coal and natural gas plants.

The Environmental Defense Fund is similarly deciding to what extent it should adjust its policy, potentially lending its support to keeping open financially struggling reactors.

In Illinois, the Natural Resources Defense Council, along with the Sierra Club and EDF, are among the advocacy groups working with Exelon and state lawmakers on a legislative deal that would reverse a decision the company made in early June to close two nuclear reactors in the next two years. The agreement would promote more energy efficiency and renewable energy while ensuring the reactors remain in operation by providing financial recognition for the zero-carbon electricity they produce.

The shift in attitude, Mr. Dominguez said, has a clear impact on energy companies’ bottom line because it “allows for agreements on statewide policies, whereas before I didn’t think we could get there.”

Michael Brune, executive director of the Sierra Club, says his group is focusing most of its resources on closing coal plants and preventing the construction of new natural gas plants.

“We’re actively debating the timeline in which nuclear plants should be decommissioned as we reduce our reliance on coal and gas in the electric sector,” Mr. Brune said.

The shift is twofold. Some environmental groups that have in the past protested existing reactors are now at times staying on the sidelines. In other cases, such as the one in Illinois, environmentalists are actively working toward keeping reactors open.

Very few new nuclear plants, meanwhile, are set to come online soon because of market conditions, so the debate has focused largely on the fate of existing reactors. Most major environmental groups remain opposed to creating new nuclear plants, instead preferring renewable electricity.

Most environmentalists have long opposed nuclear power due to a host of concerns, including the risk of a catastrophic accident (a worry heightened by Japan’s Fukushima disaster in 2011), unresolved questions on radioactive waste storage, the potential for weapons proliferation from the fuel and a preference for renewable energy such as solar and wind.

Over the last couple of years, as climate change has climbed to the top of the agenda of nearly all major environmental groups, influential leaders in both the climate science and policy arenas have shifted positions. Many now back this carbon-free source of energy, especially the existing fleet of approximately 100 reactors at about 60 power plants, which provide a steady source of electricity compared with the intermittence of wind and solar.

“If anything gives me hope in these dark times, it’s that so many environmentalists are changing their minds about nuclear,” said Mr. Shellenberger, who says he switched his position and began supporting nuclear power in 2011. “What was just a trickle of converters a few years ago has become a positive stampede.”

Some environmental groups, including Greenpeace, continue to actively fight to shut down existing nuclear plants, saying the environmental risks, from radiation emissions to waste disposal, far outweigh any climate benefit.

Roughly a dozen nuclear reactors have either shut down or are set to shut down in the coming years, according to the Nuclear Energy Institute. By closure year:

That is prompting these groups to oppose deals like the one in Illinois. “Illinois should not be bailing out old and dangerous nuclear reactors just because they can’t compete,” said Jim Riccio, nuclear policy analyst for Greenpeace.

After reactors closed in Southern California and New England in 2013 and 2014, respectively, emissions in those regions rose after having declined for some time, according to data from nonprofit electricity transmission organizations. Regulators replaced those reactors with natural gas, which is often the cheapest option but emits carbon dioxide.

Mr. Dominguez of Exelon cited a December announcement by New York Democratic Gov.Andrew Cuomo in favor of the continued operation of upstate nuclear plants as symbolizing the new mood.

“When Gov. Cuomo put a stake in the ground saying we’re going to save the upstate nuclear plants, I think that was a really significant turning point,” Mr. Dominguez said.