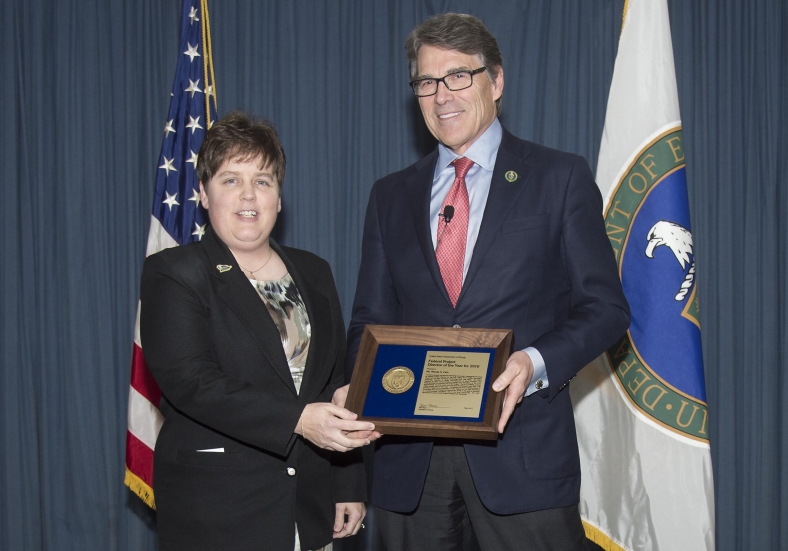 At a ceremony in Washington, D.C. on March 22, Energy Secretary Rick Perry honored the Oak Ridge Office of Environmental Management’s (OREM) Wendy A. Cain as Federal Project Director of the Year for 2016, and a team under Cain’s oversight won a U.S. Department of Energy (DOE) Achievement Award.

Cain, who oversees the cleanup portfolio at the East Tennessee Technology Park (ETTP), was described as the best of DOE project management leadership. She earned the award by demonstrating exceptional leadership and project management acumen while overseeing the demolition of a former uranium enrichment facility. Her leadership, attention to detail, empowerment of team members, and fostering of open communications enabled the demolition of the K-31 Building at ETTP almost four months ahead of schedule and about $4 million under budget.

“This is an incredible honor for Wendy and the Environmental Management program in Oak Ridge,” said OREM acting manager Jay Mullis. “Everyone who works with Wendy knows how deserving she is of this distinguished award. She brings an impeccable work ethic and commitment to achieve our mission every day, and is representative of all the dedicated and skilled federal and contractor employees executing the important cleanup mission here.”

Cain manages a portfolio of projects at the former K-25 site with an annual budget of approximately $200 million, which primarily consists of deactivation and demolition of contaminated facilities and soil remediation. Once these projects are complete, the remediated land is available for transfer to the private sector to support economic development. To date, OREM has demolished hundreds of ETTP facilities and transferred 880 acres as it transforms the site into a private-sector industrial park.

One of the projects in Cain’s portfolio was also recognized with one of the Department’s top achievement awards.

Under Cain’s leadership, the Oak Ridge Environmental Management program completed the $40 million K-31 demolition project in February 2016. The team successfully decontaminated and demolished the steel-framed building, which was one of five former uranium enrichment facilities at ETTP. The massive facility was built in 1951 and spanned more than 19 acres with 1.66 million square feet in floor space.

Completing the project ahead of schedule enabled the acceleration of ETTP cleanup, bringing the Department closer the goal of returning an environmentally remediated site to the local community.