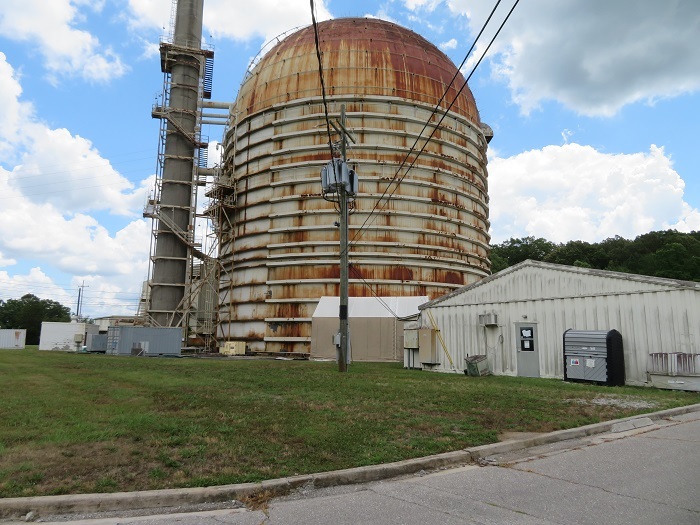 A view of the Experimental Gas-Cooled Reactor at Oak Ridge National Laboratory. The Oak Ridge Office of Environmental Management and cleanup contractor UCOR are set to fully deactivate the facility for eventual demolition.

The Oak Ridge Office of Environmental Management (OREM) is set to begin cleanup of a first-of-a-kind experimental reactor at the Oak Ridge National Laboratory (ORNL).

OREM and cleanup subcontractor UCOR are in the planning stages to fully deactivate the Experimental Gas-Cooled Reactor for eventual demolition.

“We are taking full advantage of the highly skilled workforce that recently completed cleanup at ETTP. Their familiarity with the hazards, the type of facilities, and lessons learned make them ideal for this work and add cost efficiency to our project,” Reid said.

In 1956, Congress directed the Atomic Energy Commission (AEC), which would later become DOE, to build a gas-cooled, graphite-moderated reactor — the first civilian reactor of its kind in the U.S.

Construction of the facility was a result of Congress pushing to keep pace with research advances in Great Britain. The British were working on dual purpose reactors that would produce plutonium for bombs and also generate nuclear power.

The eight-floor, 107,922-square-foot facility at ORNL was intended to be more than an experimental reactor. It was also to be a prototype for the Tennessee Valley Authority’s nuclear power generation. However, in 1965, when the facility was 90-percent complete, the AEC decided to go in another direction and stopped construction.

The reactor was never put into service, but the control, service, and turbine buildings were later used as development space for other research and programs. The facility would go on to house ORNL’s Fuel Recycle Division.

The Experimental Gas-Cooled Reactor is one of 16 inactive research reactor and isotope facilities that OREM is addressing and cleaning up at ORNL. This massive cleanup effort is happening concurrently with other OREM cleanup projects underway at the Y-12 National Security Complex.