Acting EM Assistant Secretary Sue Cange outlined the effort to members of the House Nuclear Cleanup Caucus and more than 100 others attending the event. It was one of three gatherings held each year by the caucus whose members represent cleanup communities.

“As a result of that decision, we put in place a challenge to the field sites to reduce the cost of base operations by 5 percent” in fiscal 2016, Cange said. “It was difficult — I can say that because I was a field manager at the time — but actually the end result was quite impressive.”

EM achieved more than $100 million in cumulative cost savings across the complex, Cange said.  “And these resources were reinvested into the cleanup program to address our maintenance backlog as well as aging infrastructure and other pressing needs we have at our sites.”

Encouraged by success, EM has partnered with the Energy Facility Contractors Group (EFCOG) to identify other cost savings. Cange said in fiscal 2017 the program focuses on potential improvements to the contract modification process.

“There are some real opportunities for the program to save dollars when it comes to the contract change process,” Cange said. “I think this will provide further evidence of what can be accomplished when both industry and the government partner together on initiatives like this.” 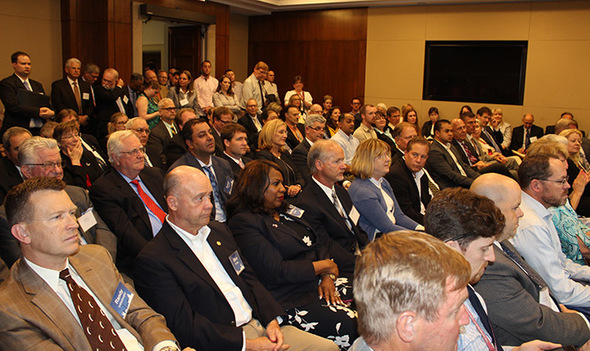 More than 100 people attended the event for the House Nuclear Cleanup Caucus.

Shoop said he was particularly proud of $3.7 million saved through expediting contract closeout for Washington Closure Hanford, which managed the River Corridor Closure Project from 2005 to 2016.

“We can’t do it without all of us working together,” Shoop said.

“It’s really a little bit of everything,” MacVean said. “There is no savings that are too small. We talk to people about savings that are as small as a few thousand dollars and they go all the way up into the millions of dollars over five years.”

MacVean said positive results are easy to see, as savings are steered into infrastructure improvements.

“We’re actually able to go out and take care of some of the legacy issues we’ve got,” MacVean said. “We’ve got something like seven or eight roofs we’ve been able to start plowing money back into. We haven’t done roof repairs in years.”

“In my opinion, DOE has not gotten the full credit for the numerous cost savings that the contactors as well as DOE have achieved over the years.” Fairchild said.

Fairchild, who is vice chair-elect of EFCOG, said the organization welcomed the invitation to join EM in developing new cost initiatives. An initial EFCOG list of 50 ideas was reduced to 13 and presented to EM, with potential changes to contract modifications emerging as the next focus area.

“We are really looking forward to the benefits.” Fairchild said.

EFCOG, in collaboration with the Energy Technology and Environmental Business Association (ETEBA) and the Nuclear Energy Institute (NEI), hosted the event for the caucus.

I want to say thank you,” Lujan said. “The extraordinary savings that you’ve been able to identify that can be reinvested back in cleanup is the way that we should do things, not just with your responsibilities with the national labs but with the entire federal budget.”

Rep. Chuck Fleischmann of Tennessee, caucus chairman, said he has spoken to Energy Secretary Rick Perry about the importance of the EM mission to remediate Cold War sites.

“Let’s face it, this is an American legacy that the federal government owes the communities to get cleaned up,” Fleischmann said. “We are working towards that in all the affected sites.”