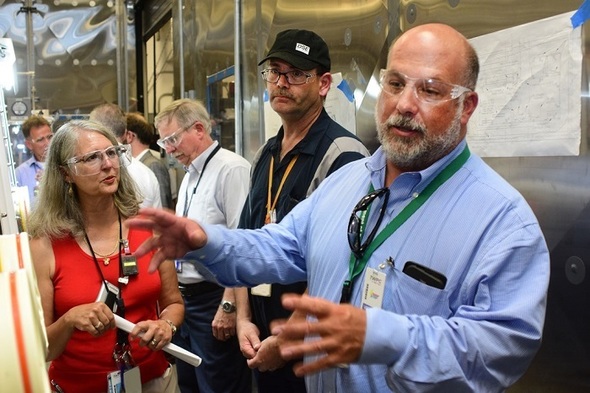 EM Update recently spoke with Roger Jarrell, Senior Advisor to the Secretary of Energy for EM, on his first impressions of the DOE cleanup program and what he hopes to achieve during his tenure in the Department.

For those who may not know you, can you talk about your background before you came to DOE and EM?

I grew up in Lexington, Va., where my parents had a horse farm. I went the Virginia Military Institute for my undergraduate degree, and then worked on Capitol Hill and on campaigns for a period of about 10 years as a political consultant.

In 2001, I went to Washington and Lee University for law school. I graduated in 2004, and from 2004 to up until about three years ago, I was in litigation full-time. I worked as a litigator in West Virginia on different complex litigation either involving big banks or the energy industry. So I dealt with some coal mining disasters, and other different litigation involving various energy companies, on both the coal and oil and gas sides.

In 2012, I moved back to Virginia and became involved in politics and campaigns again. In 2014, I was elected as chairman of the Rockbridge Area Republican Committee, where I served as the Republican chairman for the cities of Lexington, Buena Vista, and Rockbridge County. I was reelected in 2016.

You have an advantage in being able to see the EM program through a fresh set of eyes. What have been your impressions of EM so far?

From the perspective of an outsider looking in, I saw a lot of success. Obviously, we have a long way to go with a lot of the cleanup, but I think that sharing some of the positive successes and positive news stories is imperative.

The other thing that I noticed is that with all of the different communities around the various sites, because of the secrecy involved in what they did there for so long during the Cold War, those communities don’t really know how to market themselves. When I was down in Aiken, S.C. (near the Savannah River Site), for example they said, ‘Can you help us? Can the Administration help us? We need to better market ourselves.’ So I see there’s that sort of glaring need for someone to step in and help with rural economic development. The Trump Administration is pretty much all about that.

Does your background in political campaigning help with that marketing challenge?

Absolutely. To me, it’s all social networking and marketing, but not only that, it’s about framing what your positive attributes are and getting that message out there and sticking to that message.

During your visits to EM sites, what have you seen that will make them attractive and marketable for future uses?

I think they’re flexible and willing to learn and do things and step outside of the box. For example, in Oak Ridge, they have really advanced this notion of bringing in a regional airport. So they’re on the cutting edge of that, and they’re almost there. They just need a little extra help to get there.

More broadly, what do you see as EM’s main positives currently? What, in your opinion, is the program doing well?

The work that’s being done — the D&D work for example — across the complex is one of a kind. These are buildings that were never designed to be torn down and we’re having to tear them down piecemeal. Obviously, the 16 sites that are leftover are the 16 most difficult, but there’s an incredible brain trust throughout the entire complex and all of the contractors — some of the most dedicated and talented people I’ve ever met in my life. That is the wonderful aspect about this job — being engaged with those folks on a day-to-day basis.

What do you see as the main challenges facing the EM program?

What has been the biggest surprise you’ve encountered so far?

Just the complexity of dealing across many different states with many different regulatory schemes with the different dynamics and political environments of each of them. It’s obviously a very challenging environment and I enjoy it because of that. I enjoy a good challenge.

With the EM program set to continue for decades, how can support for the program be maintained to last?

I think it’s because it is a long-term effort that you have to remind people we started here, and this is where we are, and we still have to go a little bit further. I think it’s important to bring things back into perspective and back into focus. People get caught up in the year-to-year aspects too much, and they don’t really look at the long game.

To wrap things up, when your time here in EM comes to an end, what do you hope to have achieved?

Whether it’s with tribal relations, community relations, industry relations — I want to set the bar even higher. I want to basically advance the ball. To me, it’s not so much — to use a football metaphor — throwing a Hail Mary pass so much as I would rather see incremental gains. I would rather see us getting first downs and moving the ball down the field rather than just a quick strike.