Rep. Joe Wilson of South Carolina addresses the audience as the four panelists listen during the event for the House Nuclear Cleanup Caucus.

Officials with EM and other DOE missions highlighted their partnerships to clean up sites and manage and dispose of wastes at an event for the House Nuclear Cleanup Caucus on April 5.

Speaking to an audience of more than 100 people, Acting EM Assistant Secretary Sue Cange noted the interconnections between the cleanup program and other DOE organizations. She said her priority is to improve collaborations and strengthen those partnerships. 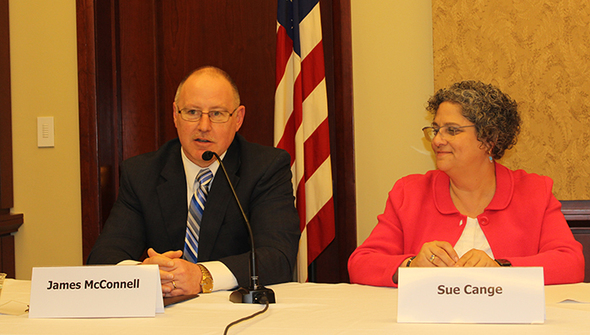 The four panelists described a DOE ecosystem in which EM intersects with a variety of missions, providing valuable site cleanup, technical expertise on waste management, pathways for waste storage and disposal, and decontamination and demolition of aging excess facilities. 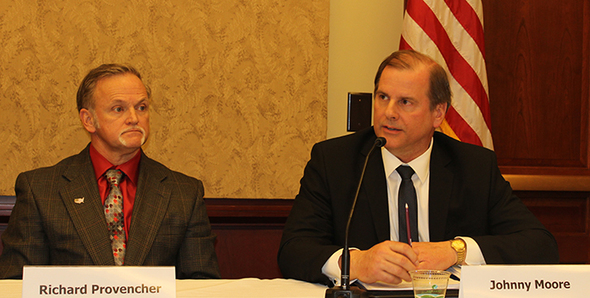 “It’s critical that we have those outlets,” added Johnny Moore, Manager of the Oak Ridge National Laboratory Site Office in the Office of Science. “Those are critical to our mission because if we are going to continue to learn and make discoveries in doing nuclear research we have to have the ability to have outlets for those materials.

“EM is needed to perform cleanup work of their facilities and of all the facilities that we have in our program operations,” Moore said.

Rick Provencher, Deputy Assistant Secretary for Idaho Site Operations in the Office of Nuclear Energy (NE), said EM and NE have enjoyed a productive partnership at the site for more than a decade.

“It’s really been a team sport in Idaho for many years,” Provencher said. In 2005, EM and NE decided to split the contract for the Idaho site, allowing the NE-affiliated Idaho National Laboratory to focus on science while cleanup contractors overseen by EM focused on remediation.

“EM, they are the experts,” Provencher said. “They have the treatment systems and the know-how to do that kind of work, and by them doing that, it allows the laboratory to focus on important research and development work that we’re responsible for.”

A challenge common to each of the programs is the management and disposition of excess facilities. A DOE report to Congress in December counted 2,349 such facilities across the Department complex. An additional 1,000 may be designated excess in the next 10 years. 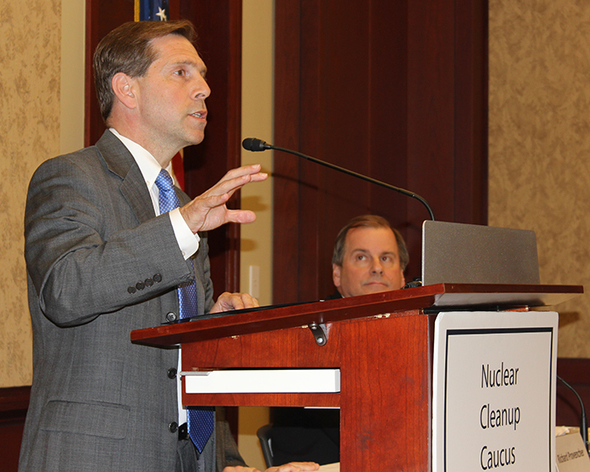 Rep. Chuck Fleischmann of Tennessee speaks at the event for the House Nuclear Cleanup Caucus.

Cange previously managed EM operations at Oak Ridge, where NNSA, the Office of Science and NE each have a significant presence. She used that site’s collaborative approach to compiling one set of data on excess facilities across programs as an example of agency partnership.

Rep. Chuck Fleischmann of Tennessee, the caucus chairman, said he was encouraged by the interactions among the DOE missions.