Recent reports of terrorists attempting to acquire nuclear materials have given greater urgency to efforts to secure and reduce nuclear materials, including the development of non-radioactive alternatives to certain radioisotopes used widely in the civilian sector.

The emergence of the terrorist group ISIL as well as the recent attacks in Europe have renewed fears about terrorists acquiring the materials necessary to construct so-called ‘dirty’ bombs. When exploded, these devices spew radioactive materials over a large area, greatly increasing their deadliness and potentially making the surroundings uninhabitable for a long period of time. 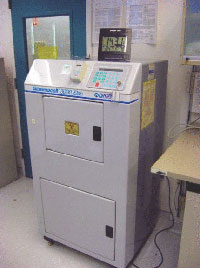 The material of perhaps the highest concern for being used in a dirty bomb is cesium chloride (CsCl), a powder containing the radioisotope cesium-137 that is used in hospitals around the world as a key component of blood irradiation devices (pictured right). This concern derives from CsCl’s widespread use and the ease at which it could be dispersed by a bomb given its powder form.

In the U.S., the Nuclear Regulatory Commission (NRC) regulates these and other radiological devices, requiring that facilities implement certain security measures in order to possess them. In addition, the National Nuclear Security Administration (NNSA) assists facilities in installing protections that go beyond what the NRC regulations require.

This call for development and adoption of alternative technologies is not new, but rather is part of the latest chapter in a debate over the feasibility of transitioning away from widely-used radioactive materials. Some argue that the current security measures are adequate and that alternative technologies are cost-prohibitive or not as effective as the existing methods. Others contend that developing alternatives is the most promising way to achieve permanent threat reduction and that cost-effective alternatives are around the corner or already here.

The perverse success of [the 9/11] attacks has forced the nation to contemplate the possibility that other technologies that were designed, and are used, solely for the benefit of society…could be used maliciously against us.

So reads the introduction of a 2008 National Academies report, mandated by the Energy Policy Act of 2005, which assessed the feasibility of transitioning away from the use of various high risk radiological materials. Clearly terrorism was a motivating factor then as it is now. 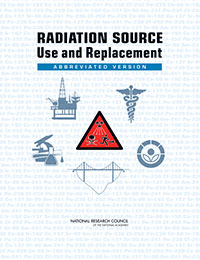 One of the study panel’s primary recommendations was to eliminate use of CsCl entirely and transition to alternatives such as x-ray irradiators. Furthermore, they contended that the government would have to intervene because “the alternatives cost more and the liabilities or social costs of the sources currently are not borne by the end users.” They also suggested various avenues for achieving this outcome, including discontinuing licensing of new CsCl irradiator sources, creating incentives for decommissioning existing sources, and prohibiting the export of CsCl sources to other countries.

The NRC has not fully embraced this recommendation, as is made clear in both the 2010 and 2014 congressionally-mandated reports of the Radiation Source Protection and Security Task Force (which the NRC chairs). Although both reports call for continued development of alternatives, the NRC still cautions in the 2014 report that “the comparable efficacy of these replacement technologies has not yet been demonstrated” and that their often higher cost remains an obstacle.

In its updated nonproliferation strategy released this week, NNSA notes that “the radiological security program has transitioned its primary focus from protecting radiological sources at their point of use to emphasizing risk reduction through additional means,” one of which is “promoting non-isotopic, alternative technologies to permanently reduce the number of sources in civil applications.”

Another recent development on this front is that the National Science and Technology Council has formed the Interagency Working Group on Alternatives to High Activity Radioactive Sources in June 2015. Chartered through the end of 2016, the group is charged with developing a set of “best practices” for federal agencies to help them transition to alternative technologies. Its initial focus will be on medical applications, including blood irradiation, sterilization irradiators, research irradiators, and radiotherapy devices. The draft best practices guide is due by June 2016.

Concern in Congress about dirty bombs & decreased budget for nonproliferation

In hearings on the president’s fiscal year 2017 budget request for NNSA, multiple members expressed concern about the 6.8 percent decrease to the nonproliferation budget, and some linked their concerns to the dirty bomb threat.

NNSA Administrator Frank Klotz explained that the decrease is primarily due to theproposed termination of the Mixed Oxide Fuel Fabrication facility as well as carryover of funds from prior years—an indirect reference to how the decreased willingness of Russia to engage with the U.S. has prevented NNSA from spending as much money on nonproliferation activities as was planned.

Sen. Diane Feinstein (D-CA), ranking member of the appropriations subcommittee with jurisdiction over NNSA, offered perhaps the harshest criticism of the cut, indicating her opposition to increases to nuclear weapons modernization coming at the expense of nonproliferation:

I just see more money for weapons and less money for everything else. … I don’t believe we should or can sacrifice our ongoing efforts in nuclear security on the altar of our nuclear weapons stockpile.