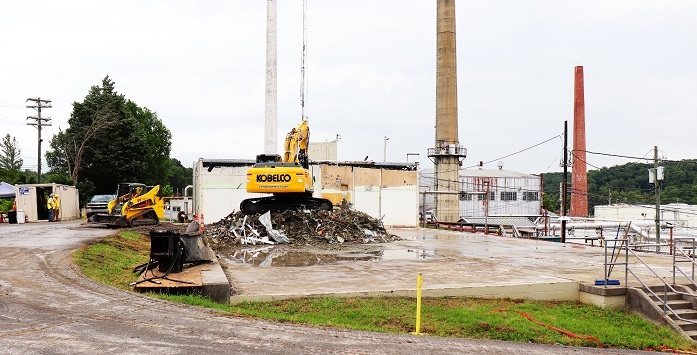 Demolition of the west end of Building 3017 is complete. This month, workers will finish refurbishing the facility’s east end with a new entrance so normal operations can resume there.

EM workers have torn down the west end of Building 3017 at the Oak Ridge National Laboratory after more than a decade of challenges, evaluations, and repairs to the structure.

The building was used for office space by Isotek, the EM Oak Ridge Office of EM (OREM) contractor responsible for processing and disposing of the site’s inventory of uranium-233.

Crews have cleared debris from the site, and the remaining portion of the building is being refurbished with a new entrance. That work is expected to be completed this month so normal operations can resume there.

The east end of Building 3017 dates back to 1951, when it was used for the Oak Ridge School of Reactor Technology. At the time, it was the only location in the world offering a yearlong curriculum to train engineers and scientists in the field of reactor theory and technology. Nearly 1,000 students graduated from the school before it closed in 1965. The east end was used for laboratory work, while the west end was added in 1967 to provide office space.

Isotek moved into the building in 2007, but shortly afterward, the structure began showing signs of structural weakness in the southwest corner when the floor began sinking due to foundation issues. The contractor added foundational support in 2008, but that did not solve the problem. The floor continued to sink unevenly, causing cracks in walls and separation of walls from the roof.

A 2016 structural evaluation report showed that the structural integrity of Building 3017 was compromised, and a permanent solution was needed to ensure the area remained safe.

Working together, OREM and Isotek decided demolition of the west portion was the best path since it could not be structurally secured in a cost effective manner. They developed a demolition plan, carefully divided the two sections, and then conducted the teardown.

With this risk eliminated, Isotek can focus on preparing Building 2026 for processing operations to address the remaining inventory of uranium-233. Those operations are scheduled to begin later this year.