“Demolishing the Poplar Creek facilities is significant for our program because it continues the visible transformation of ETTP’s skyline, and it removes the most contaminated facilities remaining at the site,” said Jay Mullis, acting manager of the Oak Ridge Office of EM (OREM).

OREM has taken down more than 400 facilities at ETTP spanning 10 million square feet, including all five former uranium enrichment facilities.

Crews demolished two of the 23 buildings and structures that make up the Poplar Creek facilities: the K-832-H Cooling Tower and the K-832 Cooling Water Pumphouse. 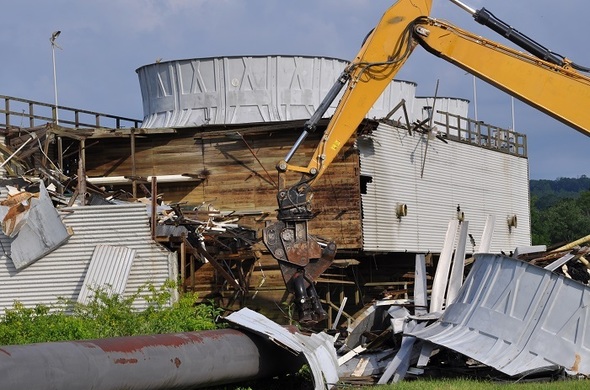 The 5,500-square-foot cooling tower supported the site’s uranium enrichment process. Constructed in 1985 to replace the original Manhattan Project version, it operated a short time until activities ended that same year.

The 11,000-square-foot pumphouse operated from 1946 to 1985. It pumped recirculating cooling water from the cooling tower basin through the uranium enrichment equipment. In the years after its closure, the building was used to store electrical equipment and batteries.

Teams have also been removing the pipes, or tie lines, that once connected the gaseous diffusion buildings and transferred the enriched uranium. Approximately 31,000 linear feet have already been removed as part of that effort; about 12,000 linear feet remain.

The Poplar Creek facilities were constructed in the 1940s and 1950s to support the site’s nuclear operations.

The next Poplar Creek facility is slated for demolition in September as OREM continues toward its goal of converting the site into a private-sector industrial park. The office has transferred 880 acres and 14 facilities to private entities.