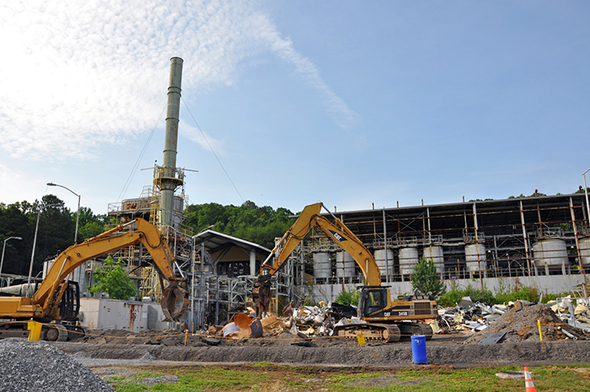 Demolition is underway on the TSCA Incinerator. The facility treated more than 35 million pounds of waste during its 20 years of operations.

Demolition of one of DOE’s most unique facilities is underway at the East Tennessee Technology Park (ETTP).

The one-of-a-kind Toxic Substances Control Act (TSCA) Incinerator was named after a law Congress passed in 1976 that addresses the production, importation, use, and disposal of specific chemicals, including polychlorinated biphenyls (PCBs).

The facility began operating in 1991. While other incinerators could burn radioactive and hazardous waste, only the TSCA Incinerator could burn hazardous, radioactive waste that contained PCBs.

As the only U.S. facility permitted to incinerate those types of waste, the TSCA Incinerator was in high demand for nearly 20 years and accepted waste streams from DOE sites nationwide in addition to material from DOE’s Oak Ridge site.

“The incinerator played a key role in cleanup for the DOE complex and Oak Ridge,” said Jay Mullis, manager of the Oak Ridge Office of Environmental Management (OREM). “With its mission complete, we are removing the incinerator and continuing toward our goal of completing all of the remaining demolitions at ETTP.”

In 2013, workers completed stabilization and closure activities required to achieve safe shutdown. All chemicals were removed from the facility, and components such as piping and pumps were triple-rinsed or removed. Additionally, OREM completed all the required Resource Conservation and Recovery Act closure actions, helping the site achieve its regulatory commitments.
Workers decontaminated equipment and areas within the facility, and applied fixatives to ensure contaminants remain in place during the teardown. Demolition is expected to be completed this fall.

The goal for OREM and its cleanup contractor URS | CH2M Oak Ridge is to transform the old government-owned uranium enrichment complex into a thriving privately owned industrial park. To date, EM has torn down more than 400 facilities and transferred more than 1,000 acres.