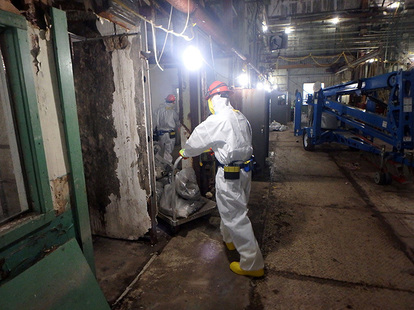 OREM expects to continue asbestos abatement until early 2018 inside Building 7500, also known as the Homogenous Reactor Experiment facility, at the Oak Ridge National Laboratory(ORNL). Crews are pulling out ceiling and floor tile, pipe and vessel insulation, and wall board.

The project further reduces risk after OREM and cleanup contractor URS | CH2M Oak Ridge cleared all combustible materials and deactivated the heat detection system inside the building earlier this year.

Deactivating the system eliminated the need for personnel to enter the building for periodic inspections, and it allowed for removal of all hazardous energy sources as required before asbestos abatement.

“Our efforts inside Building 7500 are helping stabilize a deteriorating facility, eliminate risks, and protect the environment at ORNL,” said OREM Acting Manager Jay Mullis. “Since the facility is not scheduled for near-term demolition, it is important for us to ensure the building remains in a safe and manageable state.”

Built in 1951, the reactor operated until 1961, when it was shut down and placed in standby. The 14,695-square-foot, four-level structure has degraded through the years due to its age and large amounts of water entering the building.