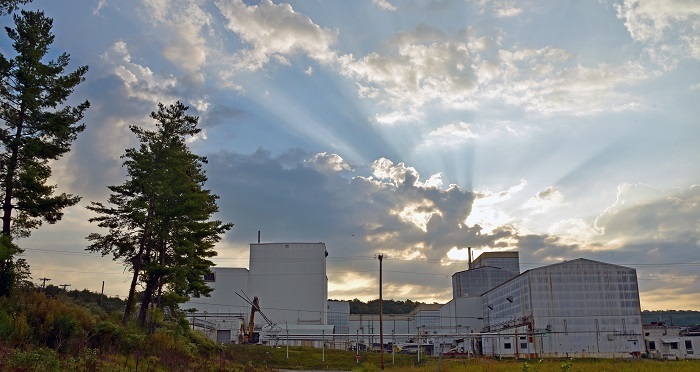 A view of the Centrifuge Complex at the East Tennessee Technology Park as the initial stages of demolition began in fall 2019.

EM’s cleanup at the East Tennessee Technology Park (ETTP) took a major step forward with the removal of the Centrifuge Complex in late July.

EM is working to complete significant cleanup at ETTP this year — an EM 2020 priority — and tearing down the sprawling 235,000-foot complex marks one of the final demolition projects at the site.

“Completing this project brings us significantly closer to achieving our ambitious goal at ETTP,” said Jay Mullis, manager of DOE’s Oak Ridge Office of Environmental Management (OREM). “Our employees have accomplished so much, and their hard work has resulted in an amazing, visible transformation that will benefit the community for years to come.”

The Oak Ridge Gaseous Diffusion Plant, now called ETTP, was closed permanently in 1987. EM has been conducting large-scale demolition at the site since 2006, resulting in the removal of hundreds of old, contaminated facilities totaling more than 13 million square feet.

The Centrifuge Complex — one of the most recognizable structures in ETTP’s skyline — was built to develop, test, and demonstrate the capability of centrifuge technology for uranium enrichment. The last of these facilities ceased operation in the mid-1980s.

A view of the Centrifuge Complex area after demolition was completed at the end of July 2020. Completion of this project brings EM significantly closer to completing its cleanup goal at the East Tennessee Technology Park, an EM 2020 priority.

OREM and its cleanup contractor UCOR began tearing down the Centrifuge Complex in October 2019. This task presented challenges due to the structures’ size and height. Some buildings stood at 180 feet in height, which is too tall to be knocked down by conventional demolition equipment.

The Centrifuge Complex contained four major sections. The K-1004-J lab section was an original Manhattan Project facility built for research and development in 1944. The K-1200 section, known as the Advanced Machine Development Laboratory and Component Preparation Laboratory, was used from 1975 to 1985 to develop machines and manufacturing processes for centrifuges.

The K-1210 section was referred to as Component Test Facility and Advanced Equipment Test Facility. It operated from 1975 to 1985 to test the reliability and operability of centrifuge machines. The facility also served as a pilot plant for testing feed, withdrawal, and depleted uranium hexafluoride transfer systems.

The fourth section — the K-1220 Complex Centrifuge Plant Demonstration Facility — was used from 1981 to 1985 primarily to test production centrifuges to be used in the Gas Centrifuge Enrichment Plant.

OREM and UCOR are working together to transform ETTP into a multi-use industrial park, national park, and conservation area for the community. That vision has already started to become a reality. OREM has transferred almost 1,300 acres at ETTP for economic development, with another 600 acres slated for transfer in the years ahead. OREM has also set aside more than 100 acres for historic preservation and placed more than 3,000 acres in conservation for community recreational use.