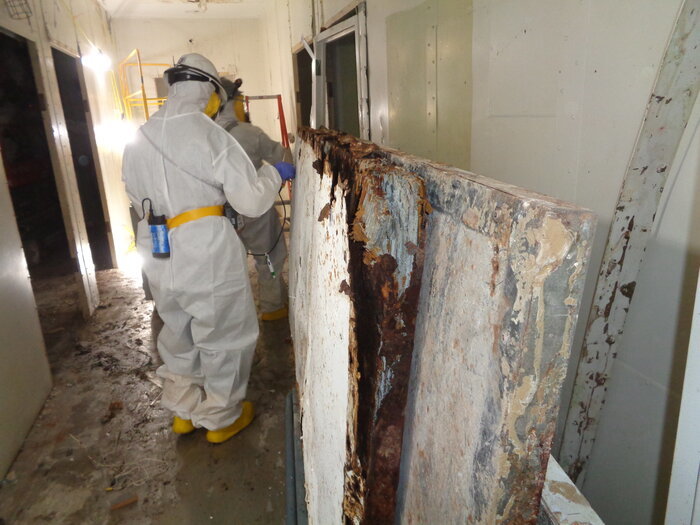 Crews in full protective gear have been conducting asbestos abatement inside remaining Biology Complex buildings at Oak Ridge since early 2019.

Crews recently achieved a key milestone by removing all asbestos from a building being deactivated for demolition in the former Biology Complex at Oak Ridge.

The Biology Complex facilities at the Y-12 National Security Complex are categorized as high risk due to their structural condition, and their removal will provide land for new national security missions at the site.

Workers have finished removing all asbestos from Building 9210, which was one of the biggest tasks to get the facility ready for demolition. The building is scheduled to be fully deactivated and condemned for demolition in early October.

Employees in full protective suits finished this effort despite several challenges, including extreme heat and humidity in the summer months and new measures to maintain a safe work environment in response to the COVID-19 pandemic.

“These hard working men and women dress up in full protective gear, which you know has to be especially stuffy in the Tennessee summer,” Adams said. “But they do it every day, while at the same time staying focused on observing all of the safety precautions and regulations required for this type of hazardous work.”

Building 9210 is set to be demolished by January 2021. Building 9207 is scheduled to be demolished later in 2021. With these two buildings removed, Y-12 has cited the area to be the location for its new lithium processing facility.

Originally constructed for recovering uranium from process streams, the Biology Complex was later used for DOE’s research on the genetic effects of radiation from the late 1940s. When operational, the facilities once housed more individuals with doctorates than anywhere in the world.