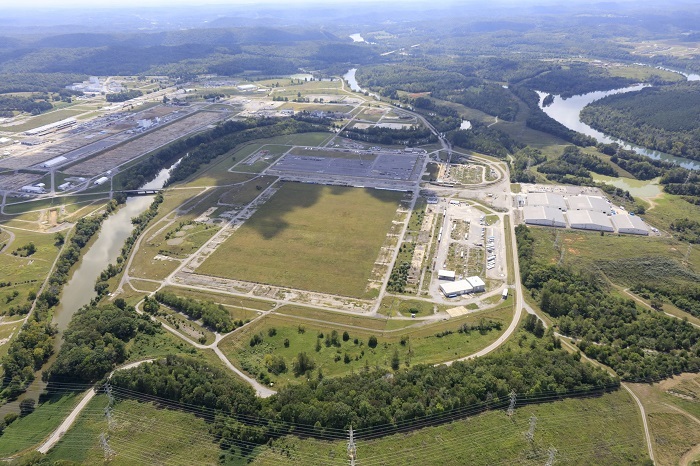 A view of the former K-31 and K-33 building area at Oak Ridge after EM completed demolition. The Tennessee Valley Authority and Kairos Power announced plans to collaborate on deploying a low-power demonstration reactor on this 185-acre parcel of land at the East Tennessee Technology Park. Kairos Power’s initial $100 million investment is expected to create 55 jobs.

Land at the East Tennessee Technology Park (ETTP) is already being put to beneficial reuse and providing new economic opportunities for the community after the Oak Ridge Office of Environmental Management (OREM) and its contractor UCOR became the first in the world to remove a former enrichment site there last year.

“When EM began its work at the East Tennessee Technology Park, we took a unique approach to not only clean the site but also take steps that transformed it into a marketable asset that the community can reuse and generate economic growth,” said David Adler, OREM’s quality and mission support division director. “This approach is creating new, exciting opportunities that will benefit the region for years to come.”

OREM has transferred nearly 1,300 acres of land for economic development at ETTP, with hundreds of additional acres planned for transfer in the near term for future economic development. As cleanup progresses, cleaned land and infrastructure are transferred from federal ownership to the Community Reuse Organization of East Tennessee, a non-profit organization, to attract new businesses to the region.

Since OREM’s reindustrialization efforts began, more than 20 businesses have located at the former enrichment site. With major cleanup at the former enrichment site now complete, larger parcels are available, opening the door for bigger companies and projects. The planned reactor by TVA and Kairos Power would mark the biggest project so far at ETTP.

“This is an exciting time for the reindustrialization program as we watch next-generation power projects plan their new facilities on the actual footprint of former gaseous diffusion uranium enrichment facilities,” UCOR Reindustrialization Program Manager Kevin Ironside said. “We have truly come full circle and believe this area offers the infrastructure and expertise to be a logical destination for these types of projects.” 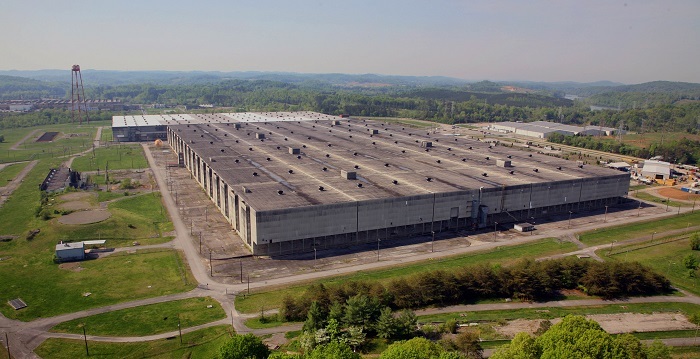 A view of the massive K-31 and K-33 gaseous diffusion uranium enrichment buildings before EM crews demolished them. The Oak Ridge Office of Environmental Management removed more than 500 structures, including these two buildings, with a combined footprint spanning more than 13 million square feet. This effort eliminated hazards and cleared land for reuse by the community for economic development at the East Tennessee Technology Park.

“Teamwork is the hallmark of the nuclear industry, and through this partnership with Kairos Power we can share TVA’s safety and innovation insights to advance nuclear technology while gaining experience with licensing for advanced reactors,” TVA President and CEO Jeff Lyash said. “Nuclear power is the key to fueling our economy with reliable, affordable, and clean electricity, and it is critical to our national security.”

TVA is a corporate agency of the U.S. that provides electricity for business customers and local power companies, serving 10 million people in parts of seven southeastern states. It generates more than 40% of its electricity from nuclear power, and is recognized as a national leader in nuclear power, with the third largest nuclear fleet in the U.S.

“Kairos Power and TVA have a shared commitment to improving people’s quality of life and pursuing innovation through advanced nuclear that provides reliable, clean energy for the future,” said Mike Laufer, co-founder and CEO of Kairos Power.

Kairos Power’s objective for deploying the Hermes Reactor is to demonstrate the capability to deliver an advanced reactor at the cost necessary to make nuclear power the most affordable source of dispatchable electricity in the U.S.

The latest developments show significant promise for the further transformation of the former Manhattan Project and Cold War uranium enrichment complex into a thriving industrial park in the years ahead.

Another innovative company, Coqui Radio Pharmaceuticals Corp., has announced it intends to build a medical isotope production facility at ETTP to focus primarily on the production of molybdenum-99 (Mo-99) isotopes. There is no domestic production source in the U.S. for Mo-99 isotopes — the most widely used medical isotope in the world. It’s used in 18 million medical procedures a year in the U.S., aiding in the diagnosis and treatment of cancer and numerous diseases.

The company expects to construct and begin operating this facility in 2025, providing more than 200 high-paying, permanent jobs.