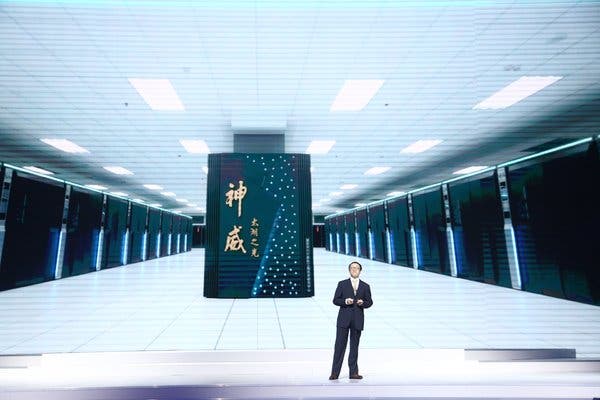 The Sunway TaihuLight supercomputer when it was introduced in Wuxi, China, last December. At the time, it was the fastest computer in the world. CreditImaginechina, via Associated Press

America is now home to the world’s speediest supercomputer. But the new list of the 500 swiftest machines underlines how much faster China is building them.

The list, published Monday, shows the Chinese companies and government pulling away as the most prolific producer of supercomputers, with 206 of the top 500. American corporations and the United States government designed and made 124 of the supercomputers on the list.

For years, the United States dominated the supercomputer market. But two years ago, China pulled even on the Top 500 list. China moved decisively ahead last fall and extended the gap in the latest tally.

Making the most powerful supercomputers is regarded as one measure of a nation’s technical prowess, even if they are a rarefied niche of technology. Countries and companies have increasingly deployed the machines in a wider range of tasks in fields including medicine, new materials and energy technology.

Supercomputing is one step in China’s rapid rise in technology, stirring concerns in America about the country’s grand plan and tactics — and the potential economic and geopolitical implications of those advancements.

China began its supercomputing push in earnest a decade ago. Initially, it absorbed foreign technology, and then steadily developed its own.

“China was slow to make that work, but it’s working now,” said Richard Suttmeier, an expert in Chinese science policy at the University of Oregon.

The high-performance computing program, policy experts say, offers a blueprint for the multibillion-dollar efforts China has recently begun in fields like artificial intelligence and quantum computing — the next frontiers of technology, where economic advantages will be won or lost.