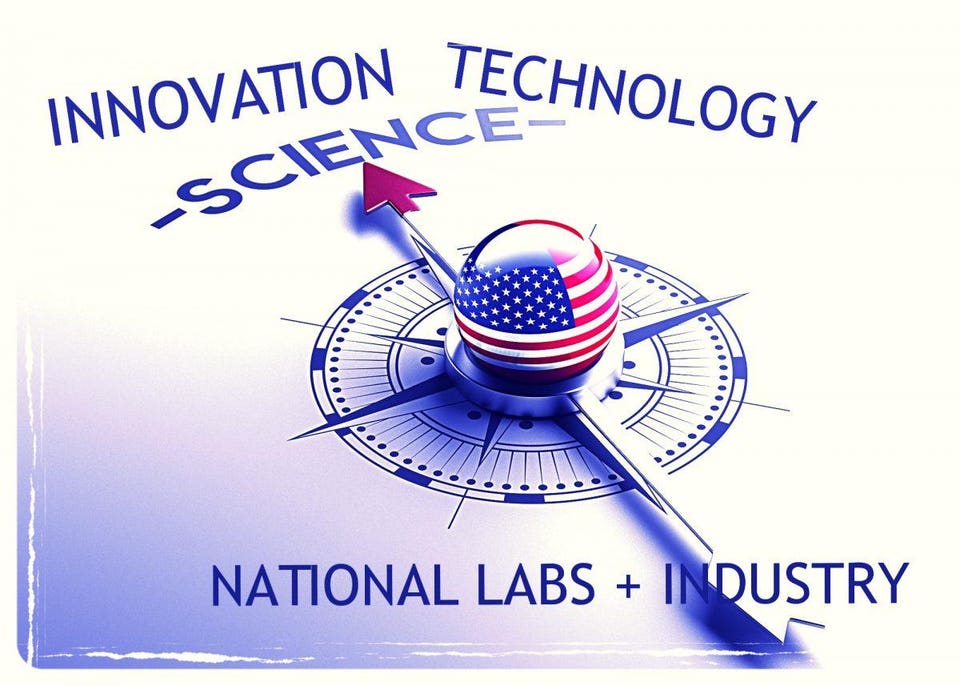 The cornerstone of collaboration is based on knowledge transfer; sharing of research tools, methodologies and findings; and sometimes combining mutual funding resources to meet shortfalls necessary to build prototypes and commercialize technologies.

Collaborations often involve combinations of government, industry and academia who work together to meet difficult challenges and cultivate new ideas. A growing trend for many leading companies is creating technology specific innovation centers, labs, and foundries to accelerate collaboration and invention.

As the development of new technologies continues to grow exponentially and globally, collaboration has more value as a resource for adapting to the rapidly emerging technologies landscape by establishing pivotal connections between companies, technologies and stakeholders.

In the US Federal government, the National Labs (including: Lawrence Livermore, Oak Ridge, Argonne, Sandia, Idaho National Laboratory, Battelle, and Brookhaven, and Federally Funded Research and Development Centers (FFRDC’s), and federally funded Centers For Excellence have been outlets for innovation and public/private cooperation. The benefits of the Labs’ role include experienced capability in rapid proto-typing of new technologies ready for transitioning, showcasing and commercialization. The Labs are a reservoir of specialized skills and capabilities with the best state-of-the art facilities for testing and evaluation of technologies.

Industry has increasingly adapted the innovation centers, labs, and foundries model used by government. They are often focused on areas of specific types of technologies where companies have expertise. Their models often include participation by clients, other companies, academia and government.

The focused innovation concept is not a new one, but it’s a proven one. PARC (Palo Alto Research Center), founded in 1970 as a division of Xerox Corporation transformed in 2002 into an independent, wholly owned subsidiary company, has been dedicated to developing and maturing advances in science and business concepts with the support of commercial partners and clients.

There are a variety of promising and exciting new initiatives in the PARC mold. For example, in the growing area of artificial intelligence and deep learning, Nvidia opened up a lab in Toronto dedicated to the technology. Giants such as IBM, Microsoft, Google, Cisco and many others in the AI ecosphere have all established innovation centers to create, collaborate, and develop in a wide range of technology disciplines, including AI.

Similarly, in defense and aerospace, leading companies such as Lockheed Martin, General Dynamics, Northrup Grumman, and Raytheon all have invested in labs, centers and collaborative projects to develop better solutions for the warfighter.

An interesting approach is the global positioning of Foundries. AT&T has established Foundry innovation centers in 6 cities around the world, and since its inception, has started more than 500 projects and has deployed dozens of new products and services. Each Foundry has a specialized research, prototype, and networking area, including IoT, Edge computing, and cybersecurity.

The exponential arrival of new technologies in diverse areas such as genetic engineering, augmented reality, robotics, renewable energies, big data, digital security, quantum computing and artificial intelligence necessitates rapid, comprehensive approaches that innovation centers, labs and foundries can help fulfill. The result of such collaborations will both keep us apprised of new paradigms and contribute to a seismic shift in breakthrough product discoveries. Such cooperation could speed up the realization of the next industrial revolution and bring benefits beyond our expectations.