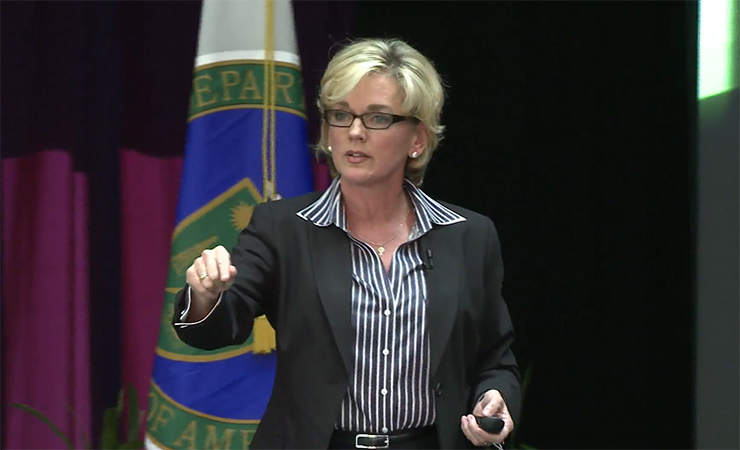 Jennifer Granholm delivering a speech at the Department of Energy in 2013 on her idea for a “Clean Energy Jobs Race to the Top.” (Image credit – DOE)

President-elect Joe Biden has announced he will nominate former Michigan governor Jennifer Granholm to lead the Department of Energy. Drawing on her efforts to diversify her state’s economy and rescue its auto industry, Granholm is a longstanding advocate for using federal funding to promote regional economic development based on clean energy technologies.

Over the past decade, Granholm has advocated a major role for DOE in spurring regional economic development in clean energy industries, inspired by the role the department played during Michigan’s recovery from the economic crisis of 2008. Her nomination marks a departure from the Obama administration’s selection of physicists for the job, but is simpatico with Biden’s plan to use R&D as a lever for mitigating climate change and for driving industrial redevelopment as the U.S. emerges from the COVID-19 pandemic.

If confirmed, Granholm is likely to give renewed attention to DOE’s applied energy programs, which support a variety of R&D efforts and subsidy programs in areas such as renewable energy, energy efficiency, nuclear energy, and carbon reduction. She will also oversee the federal government’s largest portfolio of fundamental research in the physical sciences, DOE’s network of 17 national laboratories, and activities to maintain the U.S. nuclear weapons stockpile, which, along with cleanup of Cold War nuclear production sites, occupies the bulk of the department’s budget.

Born in Canada and raised in California, Granholm received her bachelor’s degree from the University of California, Berkeley in 1984, majoring in political science and French. She received a law degree from Harvard University in 1987, after which she built her legal career in Detroit. She was elected Michigan’s attorney general in 1998, and then governor in 2002, serving two terms.